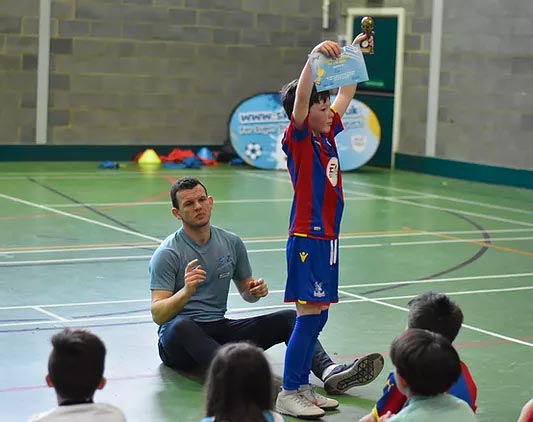 33% growth in a year with ClassForKids

Ashley started Skillz in 2012 with 10 children attending classes every week. From the get-go, Ashley had big plans for his academy. He knew success would be achieved through dedication and innovation in coaching.

Ashley’s hard work, dedication and creativity have helped Skillz go from strength to strength. The club has grown by over 33% in the last year. Ashley now regularly sees over 800+ kids each week in 9 locations with 11 staff members.

After stints in professional football - including Fulham FC’s academy and Chelsea FC’s foundation department - Ashley swapped his boots on the pitch for developing children’s football skills.

Ashley’s approach to learning engages the children making them want to come back to classes time and time again. Focusing on social skills, carefully planning coaching sessions and building a community has generated huge interest in classes. It’s also paved the way for Ashley to establish long term relationships with parents!

With a surge in growth, Ashley knew change was needed to better manage daily tasks and make it easier for customers to book and pay for classes. And as every football coach knows, getting the fundamentals right creates an open field for future success.

It was no longer manageable for Ashley and his team to manage everything on spreadsheets. While manual processes saw the business through the early days, they quickly outgrew their effectiveness.

The ability to manage contacts, register for new terms and keep on top of payments began to take its toll. Chasing payments became a regular nightmare, and registers were mounting into unmanageable lists.

With over 800 weekly class members in local schools and nurseries around Croydon and Sutton, Ashley needed a new team player.

Signing ClassForKids to his team

Having invested time and effort into building the club’s reputation, Ashley wanted to take his business to the next level. And that’s when ClassForKids joined Ashley’s team. Gone are the countless emails, mountains of paperwork and scattered customer data. Ashley now has more time to improve the club’s advertising strategy, develop coaching techniques and build his community.

Since using the ClassForKids system, Ashley has found cash flow and payment chasing has improved dramatically. Payments are now taken through subscriptions giving the club a steady stream of cash flow and making classes even more affordable for parents.

"Having a system means we can give more thought into session planning which better develops the children we teach. And it makes parents love our classes even more!

Ashley’s advice for you?

"I would say to other companies, do it!”

Get in touch, we are always here to help

Contact us →
Thank you! Your submission has been received!
Oops! Something went wrong while submitting the form.

Children love our sessions because we take the time to speak to them and find out what their interests are. We capture their imagination and that helps their learning

Central Scotland
This is some text inside of a div block.
Lisa Griffiths
The Performance Academy
Performing Arts
See all stories